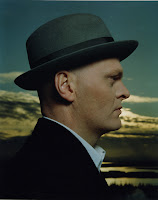 "In the first half of the twentieth century telephones were not widespread in rural Iceland. In many parts of the country there was only a telephone on one farm in each parish. People often had to be fetched long distances to answer the phone. At one farm at the foot of Eyjafjöll there was a telephone. A pauper had been assigned a home there; he was known as Pal. He wasn’t exactly bright and one of the jobs he was given was to take 'telephone messages' on horseback to nearby farms.
Pal was illiterate.
Once, on the first day of April, Pal was sent off with a telephone message. He had to ride a long way, including crossing two unbridged rivers, before he finally reached the farm, walked up to the farmhouse and greeted the people there. He was welcomed and served with cakes and coffee, and he handed the farmer’s wife the note with the telephone message on it. The note said:
'April Fool.'"