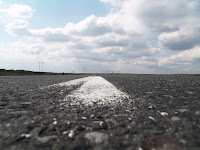 "The act that tipped the last Icelandic bank off the edge of the cliff was delivered by Gordon Brown, who froze Icelandic assets in the UK using our new, gleaming anti-terrorist legislation. The Icelanders mind that — they’re hurt by that. You see, they always imagined they were one of us, not one of them. But Gordon needed to do something cheap to look competent, so he beat up a smaller kid. Not just a bit of a slap, but a vicious kicking. Showing off to impress the girls. He would never have started it if the banks had been German or French, or even from Liechtenstein."