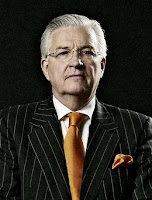 "Iceland's second billionaire ever — the first was his son, Thor Björgólfsson (in Iceland, your last name is just your dad's first name plus either sson or dottir) — he went from being worth $1.1 billion to $0. And he's being investigated. And he destroyed his country's economy. And Gordon Brown used antiterrorist laws to freeze Landsbanki's U.K. holdings. And he named his bank Landsbanki. The British hate him more than they hate his country's volcanoes."