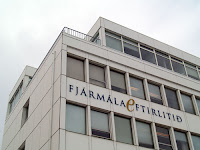 "The CEO can influence which cases go to the Special Prosecutor; and there are grounds for thinking that some of these cases may be even more toxic than those already passed, implicating even more central people and even grosser illicit money making. Some of the remaining cases may question the viability of some of the still-operating savings and loans banks, which tend to be valuable sources of patronage for members of parliament from the same region. These savings and loans are in any case extremely angry at the FME for imposing a capital adequacy ratio of 16% as a condition of continued government assistance; and yet Andersen refused to lower the requirement."