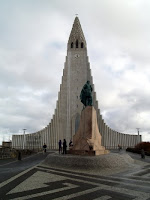 "Ingolfur Arnarson came ashore from Norway in 872 and settled on a peninsula on the south-western corner of Iceland, naming it Reykjavik (meaning 'Smoky Bay'). Located on the shores of Faxafloi Bay with Mount Esja (914m) and other peaks rising on the far side of the water, Reykjavik is easily explored on foot. The main sights, restaurants and shops are concentrated in the design district known as '101'. Named after the postcode, it encompasses the streets around Laugavegur."