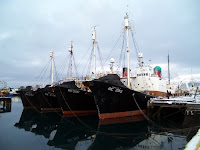 "When two countries do so, like Iceland and Japan have for fin whale, Canada has to allow shipments under customs control to transit provided they meet normal documentation and other requirements. ... Since no infraction was found, these shipments of controlled goods were able to transit through Canada under seal, en route to another country, and were exempt from Canadian permitting requirements."