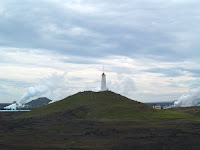 "In Iceland in the 1930s they were using coal and the whole place was dirty... They started to not have the money to buy coal because of the depression, so then they discovered geothermal. In the 1930s! ... When I went there I realised the place is not only beautiful, but it's also very much independent from the oil people, which is very good. I think all of us can do that really."