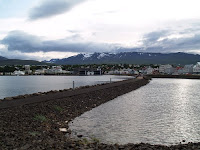 "Five years ago tourism to Iceland was low-key. Now, after a currency crash, two volcanic eruptions, and five seasons of Game of Thrones, Iceland’s dramatic landscapes and distinctive culture are firmly on the map. For most visitors, that means the south of the country – the Golden Circle, Reykjavík, and the mountains and glaciers of Skaftafell. Less visited Akureyri, in contrast, sits on the north coast under snowcapped peaks at the head of Iceland’s longest fjord. It’s Iceland’s second biggest urban area, and while you shouldn’t expect a big-city vibe (the population is only 18,000), this easy-going place has more buzz than anywhere outside of Reykjavík."