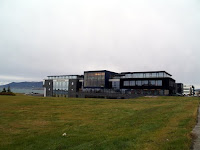 "The honesty of the report is in stark contrast to the attitude of the FSA and the Treasury, which have refused to explain how they could have done so little, while letting these banks operate in the UK. Did the FSA and the Treasury realise how badly run and regulated the Icelandic banks had been? And if they did, why didn't they do anything? If only they had done something many UK depositors and taxpayers would have been spared a great deal of pain, as would the whole of the Icelandic community."