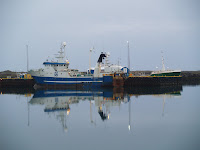 "At the same time as the Cold War began in earnest, another confrontation with Britain was brewing. The Iceland Cod Wars were a series of confrontation in the 1950s and 1970s over fishing rights in the north Atlantic. Reykjavik's unilateral declaration of an Exclusive Economic Zone that extended fishing restrictions started a conflict that culminated in Icelandic and British vessels ramming each other in the open ocean."