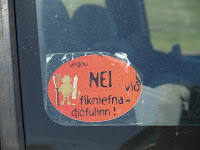 "I said if you want to try legalising it, you should do it in a small community – and I jocularly said that when they have a new mobile phone system, they always try it out in the Isle of Man. After I'd said it, I thought: 'Oh, either they are going to love this on the Isle of Man or they are going to hate it…' I also said Iceland and then I thought, 'Oh God, Iceland, the banking crisis and then the volcano, and now I'm saying they should legalise drugs there and they're not going to like it…'"