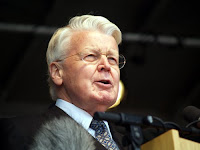 "A preference for double-breasted suits and peaked lapels reveals a distinctive British influence on Icelandic president Ólafur Ragnar Grímsson’s posh personal style. And while his outfits may recall an Oxbridge society in the 1920s—maybe Cameron’s Bullingdon, in fact—Grímsson’s aviator-frame glasses seem taken from a Columbia University S.D.S. protest 40 years later. His floppy, foppish, sallow hair, however, is all his own."