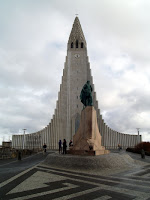 "Icelanders have been masters of creative branding for over 1,000 years. Erik the Red thought up the name 'Greenland' in about 985 to persuade visitors to come to a vast, ice-bound land mass he'd just discovered a few hundred miles west of Iceland. History doesn't record whether he told his fellow Vikings that it was 'a fantastic space, with bags of potential'. The notion, which took hold in the 1990s, that Reykjavik was the hippest city in the known universe is a stretcher that Erik himself would have been proud of. Reykjavik is a city of 200,000 people – around the same as Swindon – on a bleak stretch of the North Atlantic. The climate is raw and the wind gives you earache. Beer costs seven quid a pint."