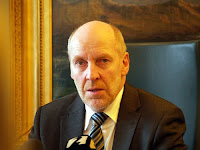 "If anyone had told me in the darkest period of 2009 and early 2010 that Iceland would be where it is today, I wouldn’t have believed them. ... We put heavy burdens on the wealthy, which was the right thing to do. But despite our best efforts, a lot of people were hurt and there are still wounds to be healed."